Catholic education in the Fremantle area has a long history, and dates back as early as 1847, when Bishop Brady purchased land in Henry Street to be used by the Sisters of Mercy.

In 1890, the Sisters of St Joseph of the Apparition, assisted by Father Martelli, built and opened their “Girls School and Infants School” in Parry Street, taking 164 infant enrolments and 221 young girls. At the same time, the Adelaide Street convent, St Joseph's College, which was opened in 1863, had 67 girls attending.

By 1958 there were approximately 300 pupils at St Joseph’s College, both day students and boarders, and new classroom space was needed. Several old cottages in “Point Lane” were demolished to make room for a new two-storey school building that was completed by the beginning of the 1959 school year– the present day main building of St Patrick’s Primary School.

“Work on 8 new classrooms costing about £20,000 has started at St Joseph’s College. They are expected to be finished in about 6 months and accommodate 400 pupils.
The two-storey block – four rooms on each floor – is being erected where several old buildings on the Ellen St property were demolished recently.
The building will be brick and tile, the framework on the ground section reinforced concrete. Each room will measure 24ft x 30ft. Plastic tiles will be laid on concrete floors. Corridor floors will have a granolithic finish.
Interior walls to the height of 7ft will be salmon-coloured brick and above that line sand-lime bricks of a similar colour.”

The Oblate fathers arrived in Western Australia in 1894 and assumed parochial charge of Fremantle. The foundation stone of St Patrick’s church was laid on 17 March 1898 and the church was consecrated two years later. In 1968, the Oblates took over the school properties from the Sisters of St Joseph of the Apparition. The Parry Street school was to become the St Patrick’s Care Centre, and the “Point Lane” building became known as St Patrick’s Catholic Primary School. The old St Joseph’s College/Covent on Adelaide Street was demolished in 1968 to make way for a Coles Supermarket and, later still, Ross’s Salvage Store.

The Sisters of St Joseph of the Apparition continued to supply staff to the school, with Sister Finbar becoming the first Principal of the newly named St Patrick’s Primary School.

In 1962 the Blessing of the Fleet Committee purchased land for the Ursuline sisters, who had been invited by Father Nanni (one of the Oblate priests) to help the Italian community in Fremantle. They settled into the convent in Attfield Street and, in 1963, established the Maristella Kindergarten at the same location.

In 2015, following a building programme at the St Patrick’s site, the Kindergarten and Pre Primary moved from Maristella’s Attfield Street location to the “Basilica Campus”. 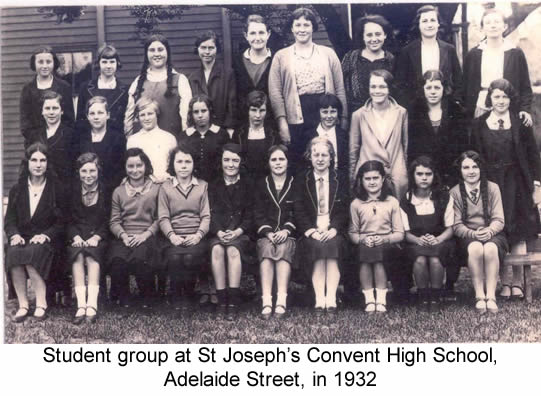